This survey based on object and the relation between variables is explanatory, correlation and quantitative. The target community members are 90 educated people from universities. The data hes been collected through questionnaire and interviewand has been analysed by descriptive statistical techniques and qualitative method.

Our finding shows that engineering and deliberately managing the process of inter subcultural transactions in the national and global level can able us to reform continually a peaceful set of learner sub cultural toward recreate a peaceful unit global Home.

The history of inter- subcultural relationship among human kind is as long as human social life. Todays in the huge and discontinuos changes age the acceleration of changes goes beyound of people adaptablity domain (TOFFELER, 1970). So majourity of people are not able to admeasure, compare it,s dimentions, and manage the geometry of their unstable, discontinous and multi dimentional inter sub-cultural communications, due to enhance the quantity and quality of social life, becouse of the sub-culture is on of the invironmental factores which shape the personality of individuals and personality is the set of stable ways that a person react to environment and communicate with others.

A mental image or mental picture is the representation in a person's mind of the physical world outside of that person (EYSENCK, 2012).

There are several theories as to how mental images are formed in the mind. These include the Dual-Code Theory, the Propositional Theory, and the Functional-Equivalency Hypothesis. The Dual-Code Theory, created by Paivio in 1941, is the theory that we use two separate codes to represent information in our brains: image codes and verbal codes. Image codes are things like thinking of a picture of a dog when you are thinking of a dog, whereas a verbal code would be to think of the word "dog" (PAIVIO, 1941).

Any comunication bigenes from perspective that any person has about himself. According theory of Dean Barnlond the relationship between two person confirm based on six attitudes are mental images as fallows:

e)        My mental imagination of your images about me 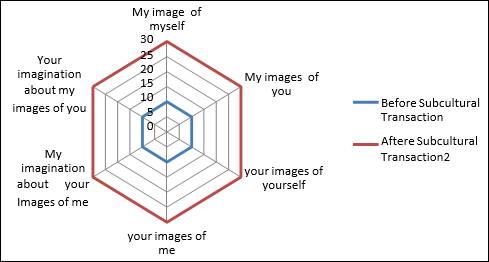 Usaully the quantity and some times the quality of peopele six dimentional mental images about her or himself and other people increase duration the life.

Subculture can be define as "a cultural group within a larger culture, often having beliefs or interests at variance with those of the larger culture" (OXFORD DICTIONARY). According Riesman (1950) we can distinguish the majority and minority of meaning of style, a majority, "which passively accepted commercially provided styles and meanings, and a 'subculture' which actively sought a minority style and interpreted it in accordance with subversive values". Hebdige (1979) In his book Subculture: The Meaning of Style, argued that a subculture is a subversion to Normalcy. He wrote that subcultures can be perceived as negative due to their nature of criticism to the dominant societal standard. Hebdige argued that subcultures bring together like-minded individuals who feel neglected by societal standards and allow them to develop a sense of identity.

Thornton (1995) drawing on Pierre Bourdieu, described "subcultural capital" as the cultural knowledge and commodities acquired by members of a subculture, raising their status and helping differentiate themselves from members of other groups. Gelder (2007) proposed to distinguish subcultures from countercultures based on the level of immersion in society. Gelder further proposed six key ways in which subcultures can be identified through their:

b)        negative or ambivalent relation to class (since subcultures are not 'class-conscious' and don't conform to traditional class definitions);

d)        movement out of the home and into non-domestic forms of belonging (i.e. social groups other than the family);

e)        stylistic ties to excess and exaggeration (with some exceptions);

f)          refusal of the banalities of ordinary life and massification.

Two sociologists showed that a subculture is a group that serves to motivate a potential member to adopt the artifacts,  behaviors,  norms,  and  values  characteristic  of  the  group  (FINE; KLEINMAN, 1979).

It may be difficult to identify certain subcultures because their style (particularly clothing and music) may be adopted by mass culture for commercial purposes. Businesses often seek to capitalize on the subversive allure of subcultures in search of Cool, which remains valuable in the selling of any product (HOWES, 1996), This process of cultural appropriation may often result in the death or evolution of the subculture, as its members adopt new styles that appear alien to mainstream society (GOLDSTEIN, 2010)

This survy is based on result an applied research, based on purpose a specific , besed on time period a cross sectional , based on variables a qualitative research and based on conditions is a nonexperimental investigation.

The members of research sample society are educated persons from high level governmental universitis of Iran who belong to variety sub-culturs of Iran., these people comparatively has inter-cultural knowledge more than others. the biographical attributes of target community members is as fallow:

The members of Sample society have been selected through accessable method.

The data and information has been collected through a questionnaire contains twenty descriptive (open answer) questions and interview. This data are first hand.

The collected data has been analysed through descriptive statistic techniques (Mean, ratio, Average, middle, Percent) and by Spider-Web thechnique. This technique showes the changes of mental images about inter subcultures.

d)        Your mental images about my subculture

e)        My imagination about your mental images of my sub-culture

f)          Your imagination about my mental images of your sub-culture

3.7.    Self- Engineering strategy of Mental image

Self-engineering strategy of Mental image is deliberately scanning the proccess of changing the six dimentional mental images about subcultures in a specific time duration.

The relationship way and ability of a person depend on her or his cultural identities.Identity of people forms through the five involute cultural circle or context. In this survey these six dimentional mental images have been analysis at the forth level of sociual context. 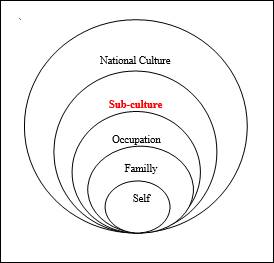 All memebers of sample society at least have a face to face transaction with one or more iranian subcultures. This transaction begins at the first decade of life for 40% and at the second decade for the 60% of people. Acording  the Ericson,s theory of personality development this decade years (11 to 21 years old) are the period of forming identity (CRAIN, WILLIAM, 2011). So one of invironmental factors which affect the social personality of irany people is inter subcultural transactions.

Any Irany have has at least a transactions with five subcultures at the middle ages (20 to 50 years old). This measns any irany people acquires six different subcultural mental Images about her or himself and other subculture members.

The subcultures that hase been experienced based on creteria of periority are as fallow: 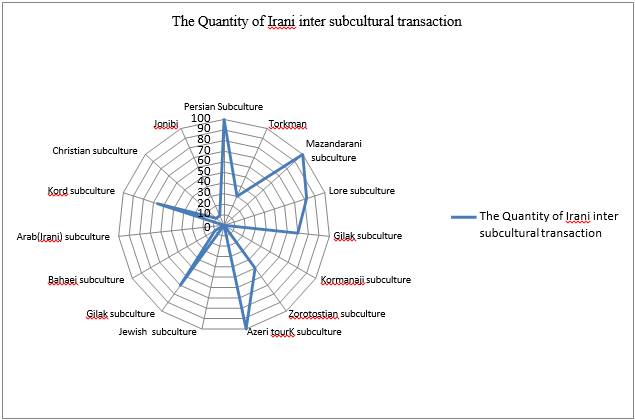 Of cource the one reson for poor transaction between some subculture like jewish and christian subcultures can be those few pupulation .

The foreign subcultures (cultures) that target community members have face to face transaction with thems are fallows:

The mental image of 85% people about her or himself and about her or him own subculture has been changed after transaction with other subcultures. It means subcultural relationship is a powerful factor that affects to the shaping proceccess of personality.

The quantity and quality(positive or negative) of changing of mental images after inter subcultural transaction are not equal see:

c)    The negative Mental image of 16% of people about her or himself hes been changed to positive.

The mental image of people about their own subculture after transaction with other subcultures has been changed (77%).

The imagination of iranian subcultures about mental images of other subcultres about her or himself hes been changed squal 75% after intersubcultural transaction. More than half of cases this change has been awareness about our negative point and weaknessess from comunicational point of view. Our pre mental images about our own subculture usually is positive but this is not true at all time. We need look at to our identity from other perspectives inter subcultural transaction gives us this oppourtunity. This means that this kind of communication can act as a cognitive strategy of recreating social and cultural even religious peace. (in the opposite direction of cultures and civilizations clash).

The three dimentional mantal images of any irani subcultures that from reciprocal prspective it is a six dimentional communication are continually and reflectively changing, reforming, developing, and become accurately. If we decide to analyse and reform and direct this proccesses deliberatly, we can continually make an effective reciprocal inter-subcultural relationship and recreate a peacfull set of globalized subculturals.