The paper presents an original algorithm composed by authors in order to determine through exact calculations the efficiency value of a simple planetary mechanism, increasingly used in aerospace, robotics, mechatronics, machine building, and various automation. The calculation program is written in excel and for its simple automation four sign-type switches, are used plus or minus 1, and a logic function for checking the status and choosing the corresponding value. In this way, the program is generalized to be used for any type of simple planetary mechanism for the purpose of accurately determining its yield.

Motion transmission is one of the most common functions of general mechanical components, mechanical devices designed to replace the human hand (GARCIA et al., 2007).

According to the mechanisms, the transmission is dimensioned according to considerations related to (LEE, 2013):

• Position of a part of the mechanism

Epicyclic transmission is a mechanical transmission device. It has the particularity of having two degrees of mobility, such as a differential, that is, the association of three trees at different rotational speeds with a mathematical relationship: The speeds of two trees are thus correlated to the third.

These trains are often used to reduce speed due to the high reduction ratios that this configuration allows to be uniformly compact with a single wheel. These mechanisms are especially found in automatic gearboxes, the Toyota Hybrid Synergy Drive, the integrated bicycle knobs, the electric motors on wheels, the winch and the double-robotic clutch.

The term epicycloid comes from the trajectory that follows an epicicloid from a point of the satellites observed on the inner planetary. However, a hypocicloid is observed if the motion reference is external to the planetary, often fixed in the reducers. This corresponds exactly to what the observer observes when viewing a satellite.

Configuration adopted in the machine differential. The axis of rotation of the satellites (often in pairs) is perpendicular to the planet. As a result, the gears are conical.

If the satellite stays fixed on the planetary gears, the two planets have the same rotation speed. When planets move at different speeds, the satellite rotates while transmitting power:

• Differences in the car

• The electro-mechanical transmission of the Toyota Prius hybrid and, in general, Toyota and Lexus (the HSD system)

It is mainly used for epicyclic trains. They are present in automatic gearboxes and in many gearboxes coupled to electric motors. They appear in the same catalogs as the latter. Their geometry provides a coaxial output shaft with the input shaft, which facilitates its implementation. Finally, they have a great ability to reduce speed. In general, three satellites are placed on the satellite carrier. Thus, the forces in the gear are not taken over by the bearings. As a result, these gearboxes are very suitable for high torque transmission.

These devices are sometimes used as multipliers, as with wind turbines. Again, here is their compactness and the absence of the radial force induced in the camps of incoming and outgoing trees that justify their use.

From the simplest train (Type I), mobility is eliminated by fastening the outer gear, also called the crown.

The input tree, while rotating, forces the satellite to roll inside the crown. In her movement, she drives the satellite door as if it were a maneuver. The planetary support is the output shaft of the device. In this configuration, the output rotates in the same direction and slower than the input.

Planetary transmissions have a number of advantages compared to fixed axle transmission. Under similar operating conditions, planetary transmissions operate longer and produce less noise compared to a fixed shaft transmission [1-6]. The gearboxes are generally used to reduce the rotational speed of the lucrative machine, such as a turbine, relative to the engine speed used. Easy to achieve performance up to 110 MW or turbine rotation speeds of approximately 60,000 rpm. Parallel shaft transmission mechanisms are typically used in these applications. However, some manufacturers of packaging and generator manufacturers use planetary gears for gas and steam turbine systems. Most planetary gear manufacturers are located in Europe and the United States. Generally, the synthesis of classical planetary mechanisms is based on the kinematic relations given by formula 1 (ANDERSON; LOEWENTHAL, 1986; PETRESCU, 2019), considering mainly the transmission ratio achieved. The most commonly used model is the differential planetary mechanism shown in Figure 1 with two degrees of freedom. Formula 1 is obtained through the well-known Willis relationship.

is the ratio of transmission input output, corresponding to the mechanism with fixed axis (when the planetary carrier H is fixed) and is determined in function of the cinematic schematic of planetary gear used. 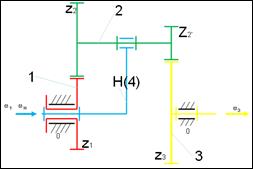 In general, planetary mechanisms are less synthesized based on their mechanical efficiency developed during operation, although this is basically the main engineering criterion of performance.

Even when considering the efficiency criterion, the determination of the planetary yield is made only with approximate relationships (MARTIN, 1981; ANTONESCU, 1979; PELECUDI et al., 1985; PENNESTRI; FREUDENSTEIN, 1993) or with a particular character (not generalized) del (CASTILLO, 2002; CHO et al., 2006). This paper aims to determine the real efficiency of planetary trains by means of an exact, generalized calculation algorithm that takes into account the efficiency of the mechanism determined by an exact original method, the algorithm being also an original one (PETRESCU; PETRESCU, 2011; PETRESCU, 2012; PETRESCU et al., 2016).

Classically, the synthesis of planetary mechanisms is generally achieved through kinematic relations, especially taking into account the ratio of transmission made from input to output. The most commonly used model is the differential planetary mechanism as shown in Figure 1.

Generally, in practice, simple planetary mechanisms with only one degree of mobility are used, except for the differential mechanism. For the differential mechanism to achieve a single degree of mobility, remaining in use with a single input and a unique output, it is necessary to reduce the mobility of the two to one mechanism, a reduction that can be achieved by connecting in series or parallel two or several planetary mechanisms by linking to fixed axle mechanisms or by immobilizing one of its movable elements; element 1 in the case shown in Figure 2 (in which case the wheel 1 is identified with the fixed element 0).

The entrance to the simple planetary mechanism shown in Figure 2 is made by the planetary support (H), and the output is made by means of the movable kinematic element (3), the wheel (3). The kinematic ratio between input-output (H-3) can be written as shown in relation 1;

is the ratio of transmission input output of the model in Figure 2 and is determined by relation 2, depending on the number of teeth of wheels 1, 2, 2' and 3:

For the stiffening of the various kinematic planetary systems represented in figure 3, where the input is made by the planetary support (H) and the output is obtained by the final element (f), the initial element that is usually immobilized will be used for kinematic calculations in the generalized relations 1 and 2; thus the relation 1 takes the general form 3 and the relation 2 is written in one of the custom 4 forms for each separately presented scheme used; where i it becomes 1 and f takes the value 3 or 4 as the case (PETRESCU AND PETRESCU, 2011; PETRESCU, 2012; PETRESCU et al., 2016).

For the ratio between the input and output of the transmission of the models in Figure 3, one of the system 5 relations is chosen, according to the situation used.

For a normally planetary system (Figure 2) the mechanical efficiency can be determined based on system 5, which shows that the power between input-output is conserve. With Willis one determines ω3. It uses then the conservation of power between input-output for a simple planetary gear apparently fixed axis (1-input, 3-output). For calculating the efficiency of the simple planetary mechanism, the original relationships given by system 6 are used.

To calculate the yield of a simple planetary mechanism using original relationships 6-9, one writes an original calculation algorithm using the familiar excel program shown below in the table 1.

In system 6 there is an x exponent that can take the value +1 or -1. It is identified in the computing program through a logical function (see the line 35).

It was considered for all cases a tilt teeth angle of 15 degrees [deg].

The planetary system efficiency given by the original exact presented formula has the great advantage to be determined easy and for any type of simple planetary gear.

By this we have now high precision in any asked case.

Planetary mechanisms have a significant number of advantages over fixed axis transmission. Under similar operating conditions, the planetary transmissions have a longer life and produce less noise compared to a fixed shaft transmission.

A second great advantage of this formula is its precision.

Analyzing the previous calculation examples, it can be noticed that the yield (of a simple planetary gear) increases when the sun gear transmission ratio input-output decreases and also when alfa0 angle is decreased.